The Creation of Barriefield Village

In 1814, at the height of the War of 1812, the Hon. Richard Cartwright, a local businessman, recognized an opportunity to the east of Kingston, adjacent to the Military Reserve. He divided into town lots the western hillside part of one of his Loyalist Grants, Lot 21 east of the Cataraqui River, and began to sell them.

Soon occupied by officers, armourers, boat builders, butchers, coopers and masons from the nearby Naval Dockyard and Fort Henry, the settlement was named Barriefield in 1820 for Commodore Robert Barrie, Commissioner of the dockyard. The townsite survey was based on a grid pattern of three streets running east and west and three north and south containing two waterfront industrial lots and 12 house lots – a plan that is legible to this very day.

Prior to the construction of the Cataraqui or Penny Bridge, people had to either cross the harbour by ferry or travel by road up to Kingston Mills in order to get from Kingston to Barriefield. This was a great inconvenience for the many civilian tradesmen who were employed daily at the Royal Navy Yard, currently the Royal Military College. The opening of the bridge in 1829 marked a significant improvement in Barriefield’s relation to Kingston and other points west of the village. Barriefield gained importance as the focal point of Pittsburgh Township, which located its municipal office there.

By 1850 the hamlet had grown to include a church, school, store sawmill, several taverns and artisan shops, and about 60 houses. Its chief industry was boat-building. Barriefield declined economically in the twentieth century, but the lack of new development ensured the retention of its 19th century appearance and surrounding landscape. 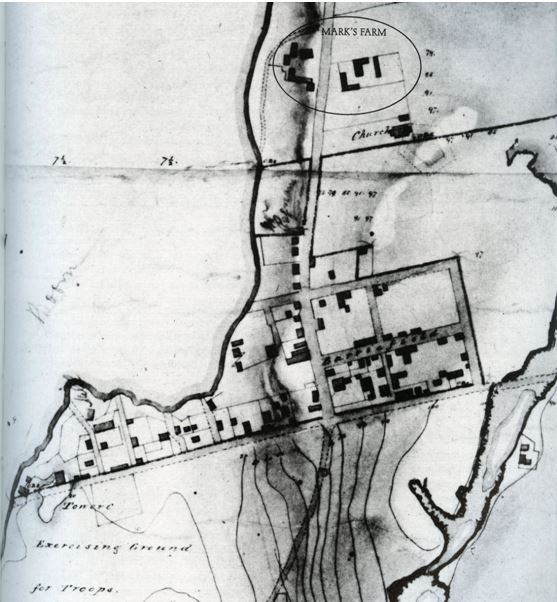 The map shows how Barriefield looked in 1850: Of special interest is the extent of building on Green Point, now devoid of settlement. Also of interest is Barriefield Common in the bottom left, marked “Exercising Ground for Troops.” This pattern of land use remained largely unchanged until the highway bypass was built in 1969 but is still very recognizable today. The Village of Barriefield was designated under Part V of the Ontario Heritage Act in 1980, not just because its buildings were considered to be of historic significance, but also because of its unique historic rural village character. The surrounding open spaces made it still recognizable as a historic cultural landscape, a key feature which has been recognized in the Barriefield Conservation District Plan, the city’s new Official Plan, and the current zoning. In 2010 residents and property owners formed the Barriefield Village Association to conserve the heritage of the village.